South Africa is known as one of the countries with diverse animals that live in parks and reserves. If you are planning on visiting the country, some of the things you must do include seeing the flora and fauna in the region. Parks that you should consider visiting when you are in South Africa include: 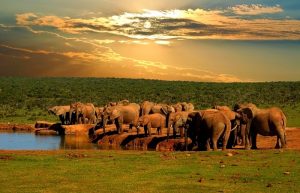 As the name suggests, this park has many elephants (more than 500 of them). The history of the park dates back to 1931 when it was established to save 11 elephants. It has since grown to become one of the country’s prominent animal parks.

This park has the largest number of rhinos in the world. Hluhluwe game park is listed as the oldest natural park in Africa, and it has done a good job of conserving the Southern white rhinos that were almost extinct at some point in time.

This park is unique because it combines the Kalahari Gemsbok National Park in South Africa and the Gemsbok Park in Botswana. Together, these parks form a vast 3.6 million hectares of land where animals and plants are conserved. Throughout the year, animals are always migrating into the park for food and water. Some of the animals you are likely to find at the park include cheetahs, leopards, birds, and monkeys.

It is a fairly new park, but it has a breathtaking scenery. It combines the beauty of the savanna with sounds of wild animals roaming freely. There are also different type of plants and birds to watch in the park.

This park was formerly known as Greater St. Lucia Wetland Park. It is made up of Coastal dunes, major lakes, and swamp forests. It has several marine animals, including crocodiles, birds, and other exclusive aquatic lives. It is also surrounded by fascinating forests and unique trees.